To meet ever-increasing demand for basic library services, library supporters in Josephine County are asking voters to Vote Yes on Measure 17-79 to form a library special district on the May 16, 2017 ballot. 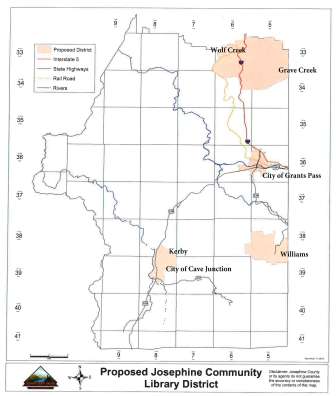 With the defeat of countywide library district measures in 2006 and 2014, library supporters — including the Josephine Community Libraries Board of Directors and the Keep Our Libraries Open political action committee — concluded that the 2017 version of the measure should have the district boundaries include the service areas around the libraries. This means that the proposed library district will be made up of just those voting precincts that surround one of the four public library branches in Grants Pass, Cave Junction, Williams, and Wolf Creek.

This smaller, noncontiguous library district will provide a foundation of stable funding for the future and be completely independent of county government. Stable funding will allow for more hours and better materials.

Tax revenue to be used only for libraries

Funds raised by the tax could only be used for the library district, and could not be diverted to fund Josephine County government departments.

Do you live in the proposed district? 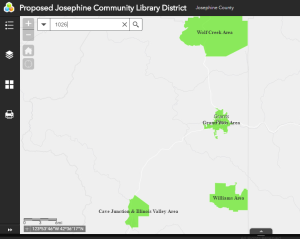 To check whether you live in the proposed district, click to go to the Proposed Library District map. In the upper-left corner of the screen, type your property address and press Enter. The map zooms to show your address. If your address shows in one of the colored (blue, orange, purple, or green) blocks, you live within the proposed library district boundaries. If your address shows in a gray area, you live outside the boundaries. For more assistance, email info@keepourlibrariesopen.com.